We are on the “Via Mercatorum”, a treasure trove of past treasures, artefacts handed down to the present day, works of art, landscapes and nature, yesterday as today … but history is above all made by people, by the characters we find on books, but even more from the common people, from the people who, day after day, have faced the trials that life wanted to impose to them… and today some of these people are lucky enough to be here to tell us anecdotes and experiences that appear unlikely to younger people, even if they occurred less than a century ago. These stories are told us with great simplicity, as if they were completely normal… 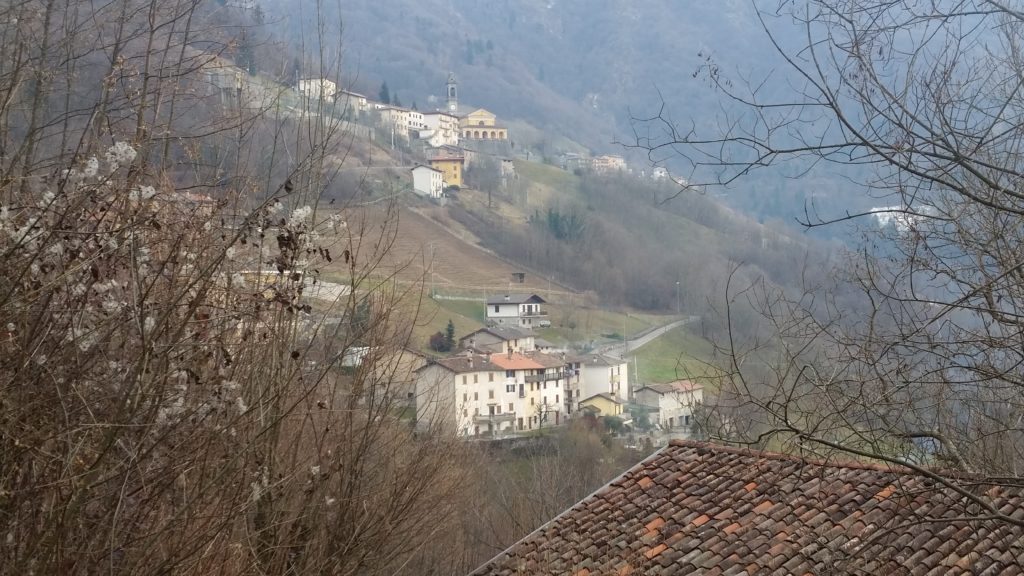 Angelina Cortinovis was born in Trafficanti, a hamlet of Costa Serina, on December 15th 1924. She opens the door to her house. 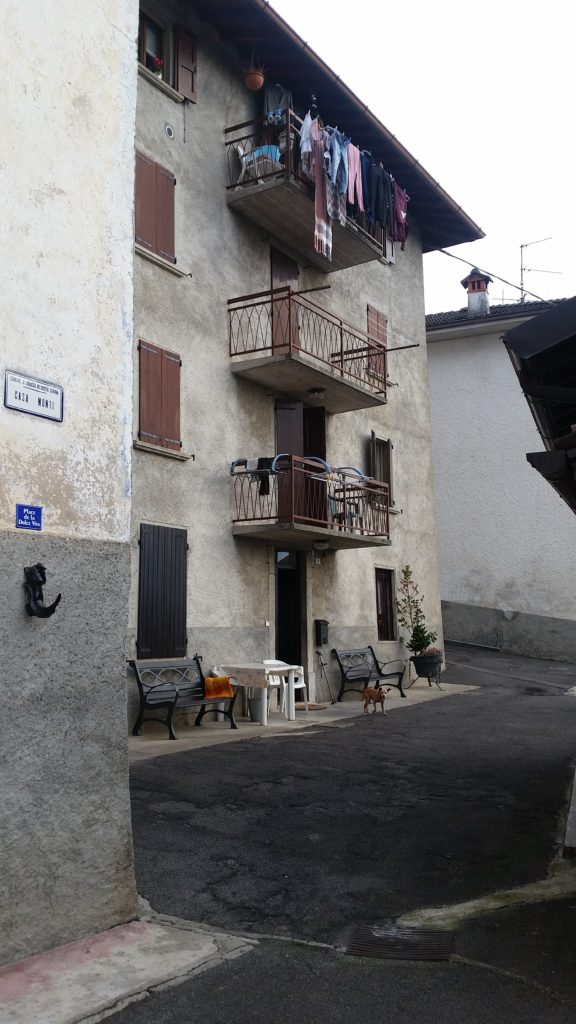 With great cordiality, together with Raphael, her younger son, she welcomes us for a coffee and an enriching chat. Angelina has always lived here: while laughing, she says that when she got married, she didn’t change the building where to live, but she just entered a different door… as her girl’s house was the one next door. There were no roads here: people used to walk up and down the paths and mule tracks, like this one that the inhabitants still use. 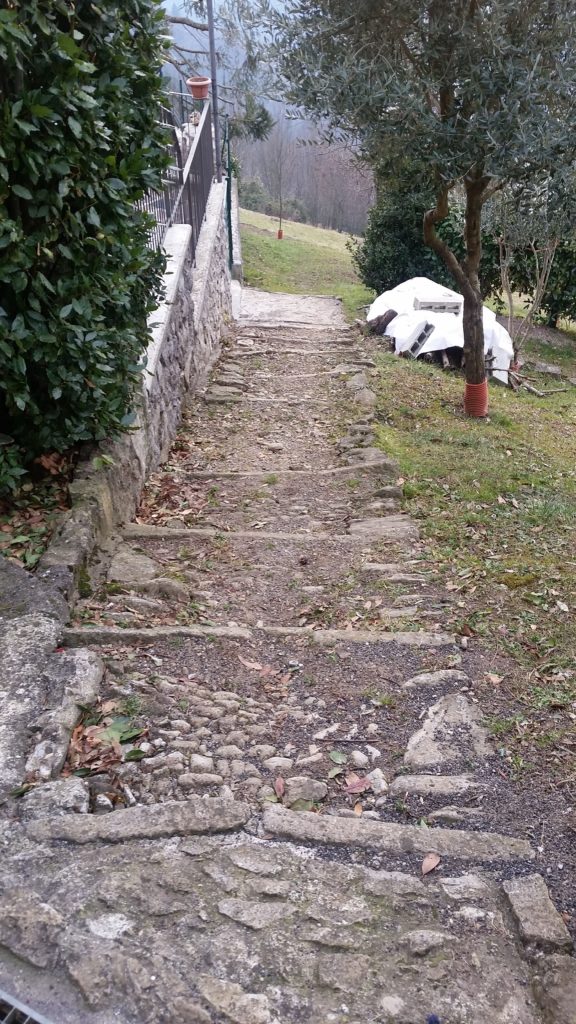 There was no telephone: in the hamlet there were some strategic points from which one could communicate, such as the location near the cemetery. The vegetation was less dense, there were more meadows than woods and people could see each other from distances. So, from one point to another one, they used to shout sentences that represented a sort of code, for example “come to meet me” meant that something serious had happened and that we had to hurry. It wasn’t easy if you were sick: the doctor was located in Zogno. We are curious about how the moment of delivery could have been for Trafficanti in the 1950s. She gave birth at home, but the midwife came from Bracca on foot, so she often didn’t arrive in time or she was busy with another birth, as it happened when it was time for Angelina to give birth to her third child. The midwife, after having visited her, left to attend a birth to Ambriola, believing that it was still too early for Angelina, who gave birth to a child of 5 kg and 100 g a little later. We remain incredulous and a little amazed thinking of the risks they used to take and which are inadmissible today … but Angelina had already been through a lot … She lost her father when she was just 9 years old and attended the active school of Trafficanti until the third grade. They were 5 siblings living with their mother Aurelia: they had to work for the family and Angelina started going to look after the cows on Mount Suchello in the summer months. She was just a child and her family missed her, but she tells with gratitude in her eyes that she was treated well and there, to make up for her work, she could eat a lot of good cream and the polenta “consada” which she certainly wouldn’t have had at home.
When she was 10 years old, she had learned to milk the cows on Suchello Mount and she slept in a space set high in the barn, above the animals.
Angelina remembers that, when she was a child, the moles were caught in traps and their skin was spread on a piece of wood and dried. Each skin yielded 20 cents: it was withdrawn from the “stracer”, the rag-picker.
Periodically they went to Costa to rent the machine to card the wool and to redo the mattresses.
In each house there was one of these tools for spinning wool and making clothes. There was nothing ready! 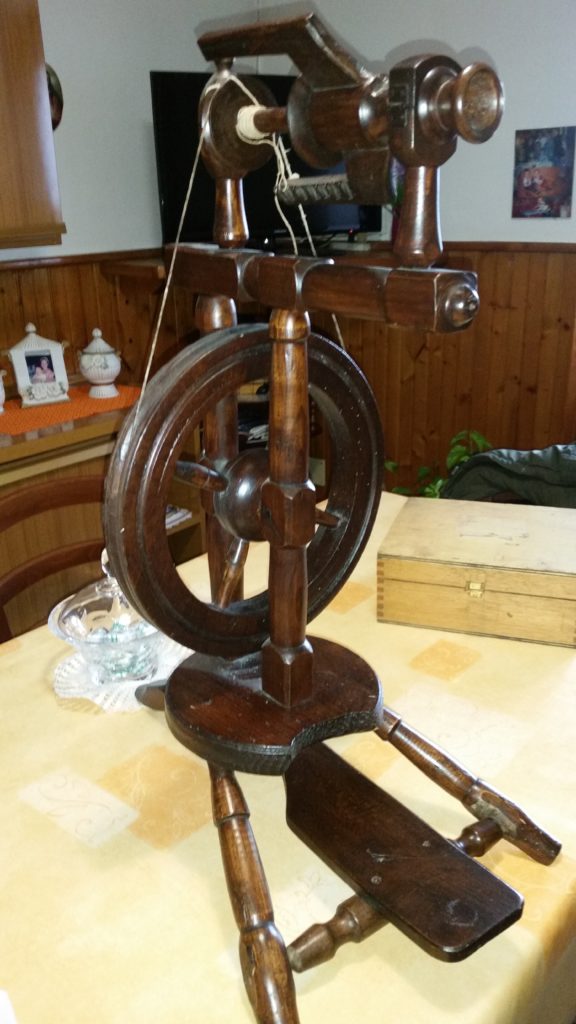 At the age of 15 Angelina started working at the Minelli factory, where she stayed until she got married. 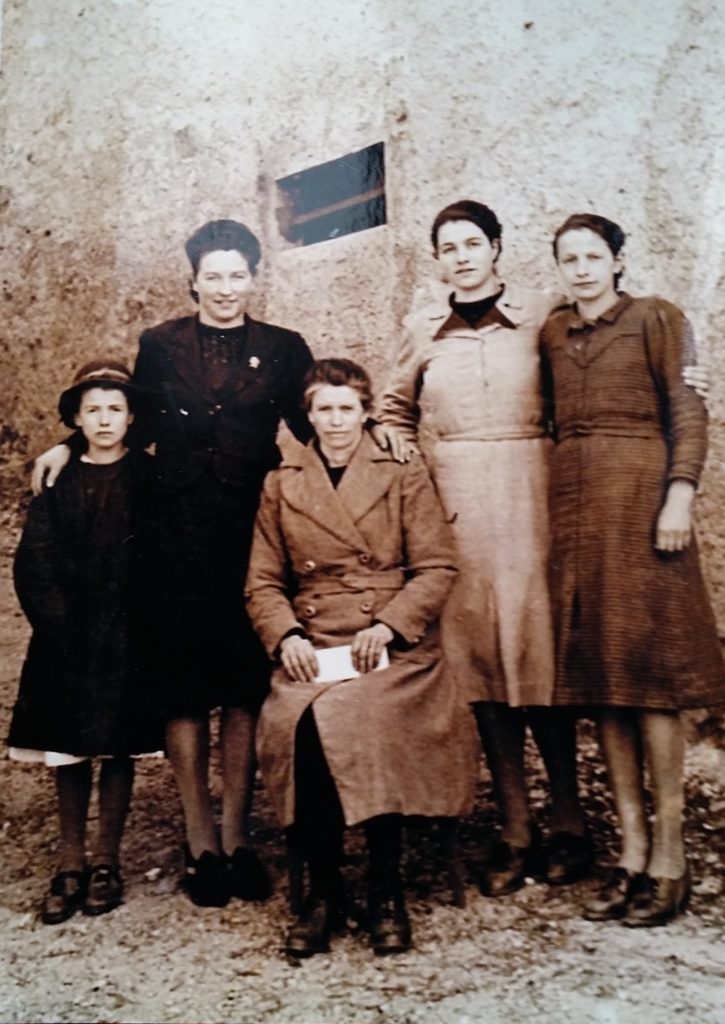 The women from Mrs Aurelia’s family, Angelina’s mother, sitting in the middle of the photograph and from the left, standing at her hips, Maria, Angelina, Erminia and Ines. 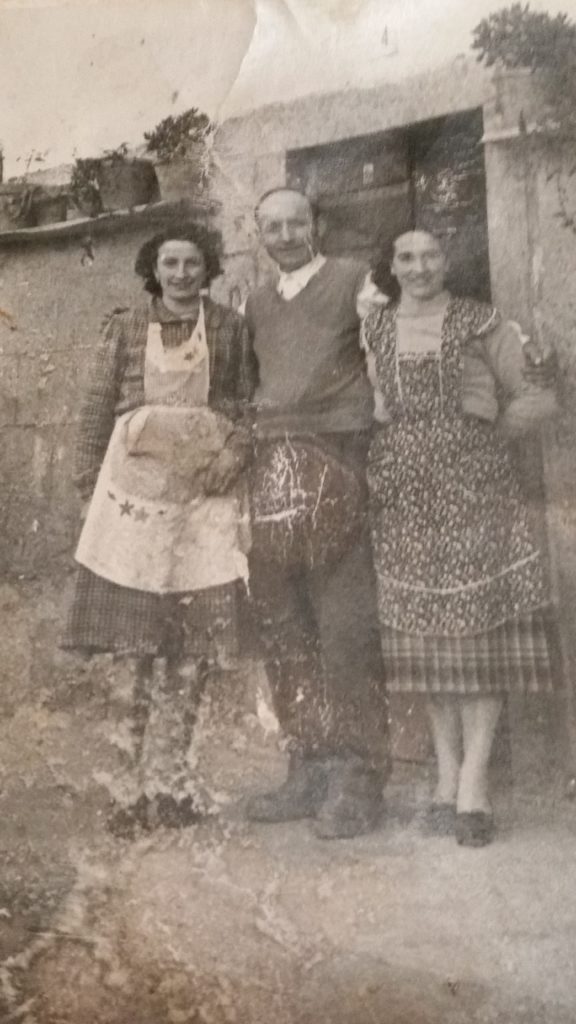 Angelina on the doorstep with her husband and sister

Before the marriage, however, there was the war: there was not much to eat and Angelina remembers well that time when she went to Brescia with the freight train in search of corn, managing to remedy 7 or 8 kg. of it. She remembers when they used to go to Selvino to trade in butter for salt, or to trade a calf in exchange for fabrics. Then the end of the war and the marriage on December 28th, 1946, and then her 4 children. 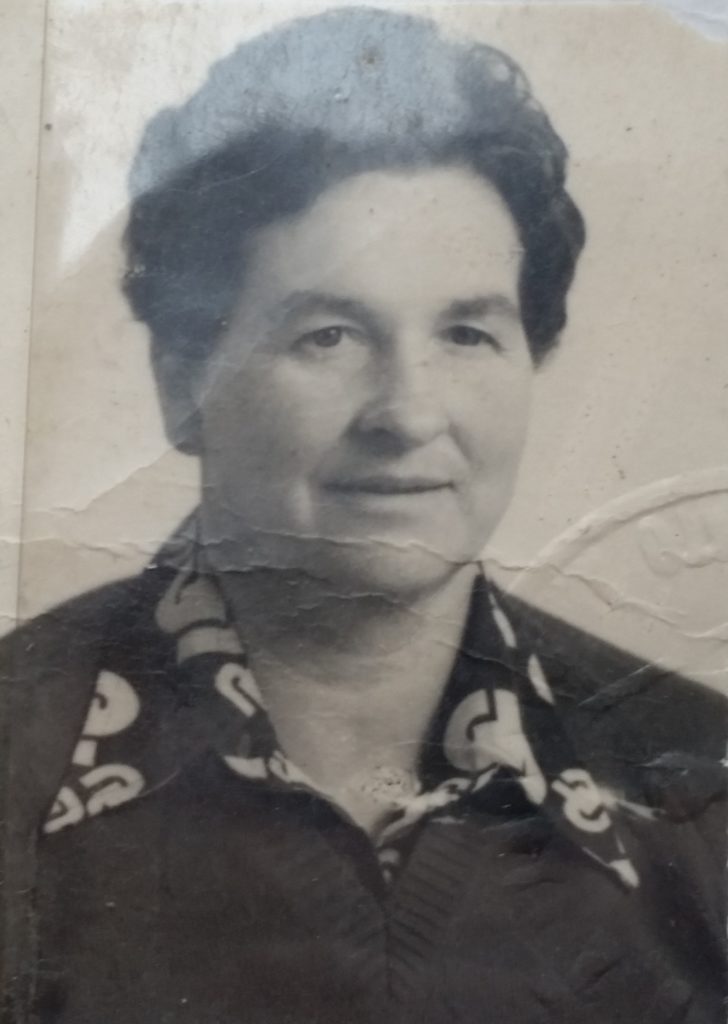 Angelina concludes her stories by stating with serene conviction: “We had little or nothing, but we were happier than now! Now we are no longer satisfied! This is the truth! ”
We take leave of Angelina and Raffaello almost sorry to have to go, but we will return to find this welcoming and smiling lady, who has been able to transmit so much serenity.

Let’s go back to Nespello on the “Via Mercatorum” track, with the emotion just experienced in the heart, the gratitude towards Angelina for having shared with us some precious memories and the certainty that, today more than ever, even the history of ordinary people is like said Cicero “testis temporum, lux veritatis, vita memoriae, magistra vitae, nuntia vetustatis”, that is, witness of the times, light of truth, life of the memory, teacher of life, messenger of antiquity. 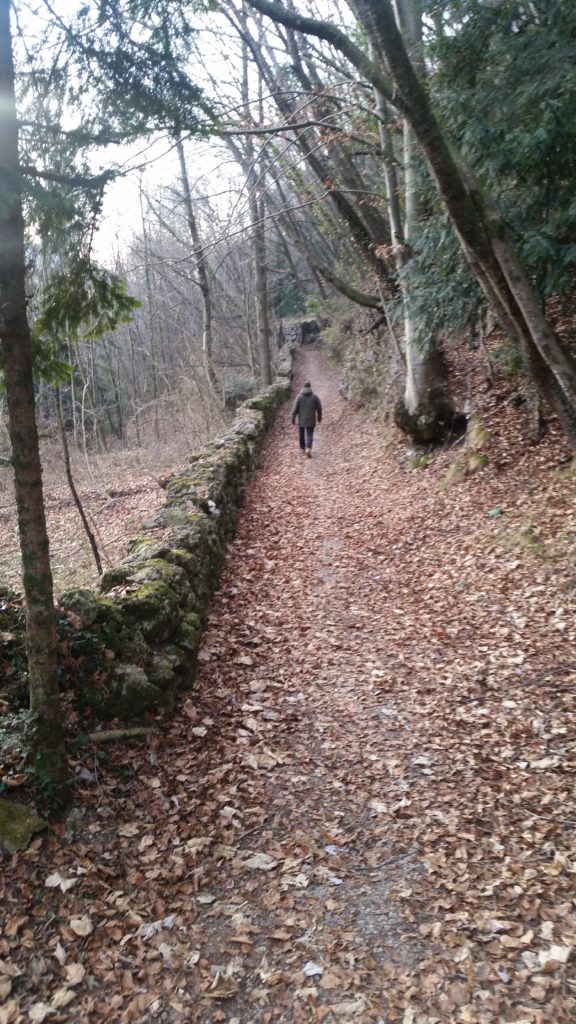