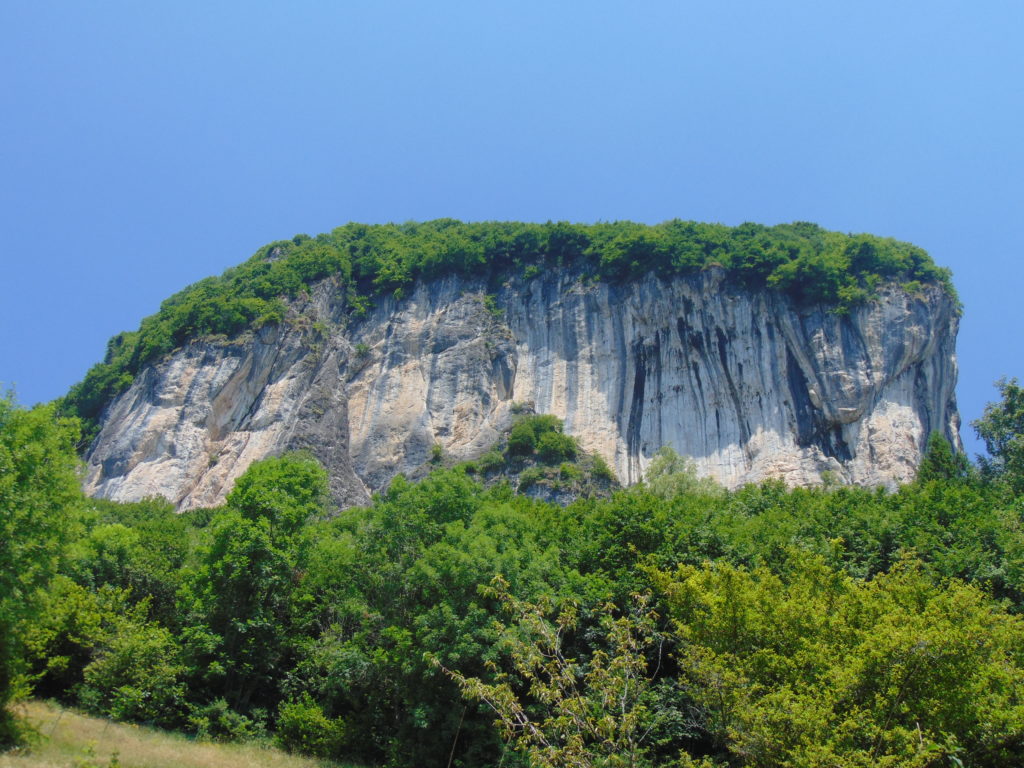 The “Corna Bianca”, a famous rock climbing wall, dominates in all its grandeur; among the green of the thick vegetation, we can see some crosses.
Today we are here to pay tribute to those crosses, placed in memory of the massacre that took place here on 25th November 1944 and on the following 1st December.
We will tackle a circular route that, starting from the parish church of Cornalba, will lead us through an historical journey. In fact, Cornalba is also, and above all this, a place of memory.
The monuments, the squares, the plaques on the walls of the houses, the streets … if we look carefully, everything here speaks of them: the partisans. 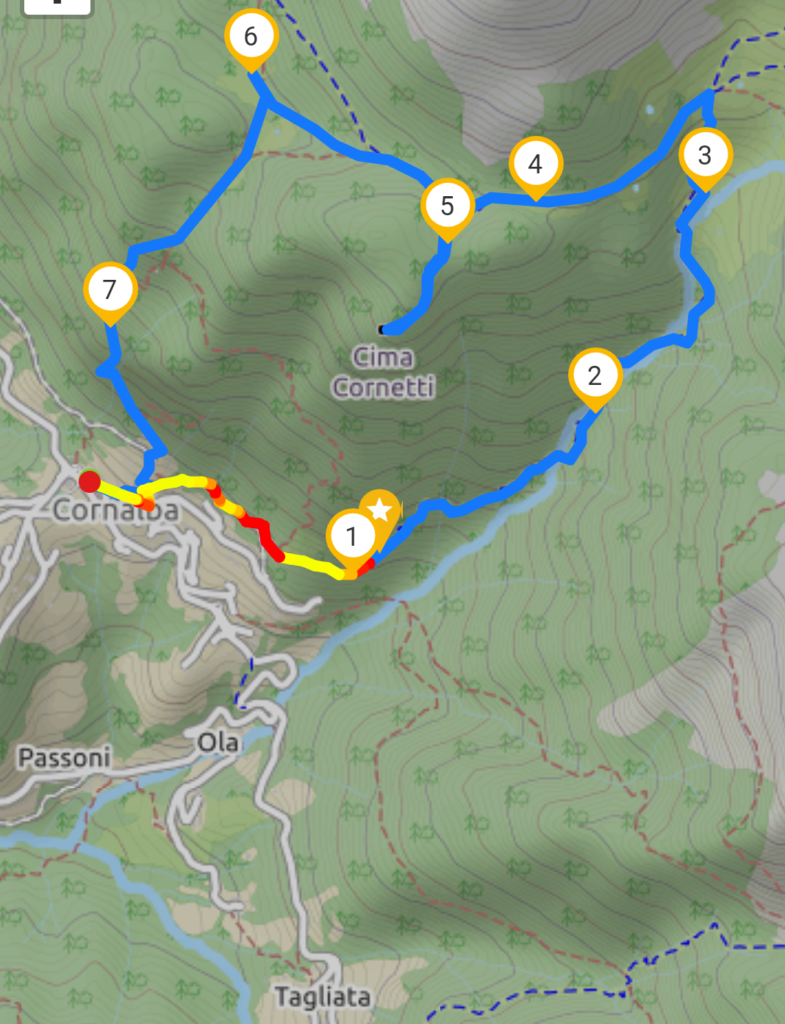 Next to the parish church is the Monument to the fallen partisans of “Giustizia e Libertà Brigade” (Justice and Freedom Brigade), killed on 25th November and 1st December 1944.
The plaque affixed last year during an event of the commemoration, event which takes place on the last Sunday of November, recalls that the building was inaugurated in 1959.
The appointment at the end of November is, in fact, the oldest and most important in the whole of Bergamo.
Please refer to “Partisans in Cornalba” on this site for more information.
Crossing the road, we go up through the historical centre of the town where, immediately after the plaque commemorating the passage of merchants during the Middle Ages, we meet the Piazza 25th November.
At the end of the straight road, the plaque in memory of the partisan Franco Cortinovis: we are at the intersection with “Via Partigiani”. 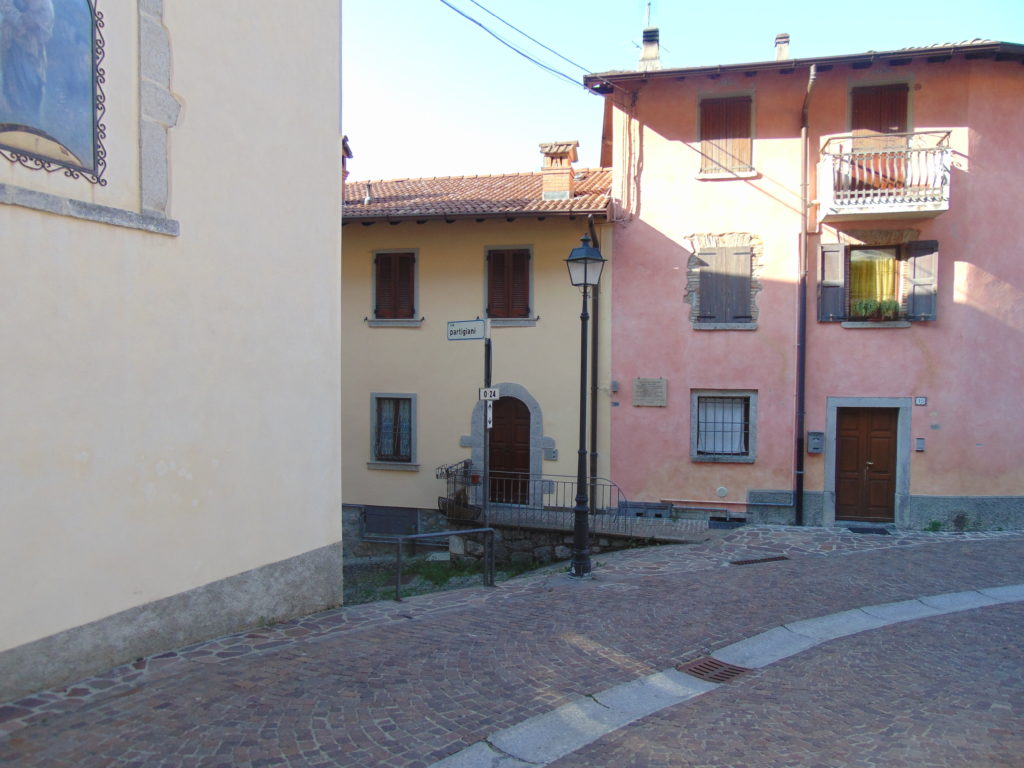 We turn to the left, following the punctual indication for the “Path of the Partisans”. Looking up in front of us we see a white building, well known as: the “Ca ’Bianca” (White House), the headquarters of the partisan command. 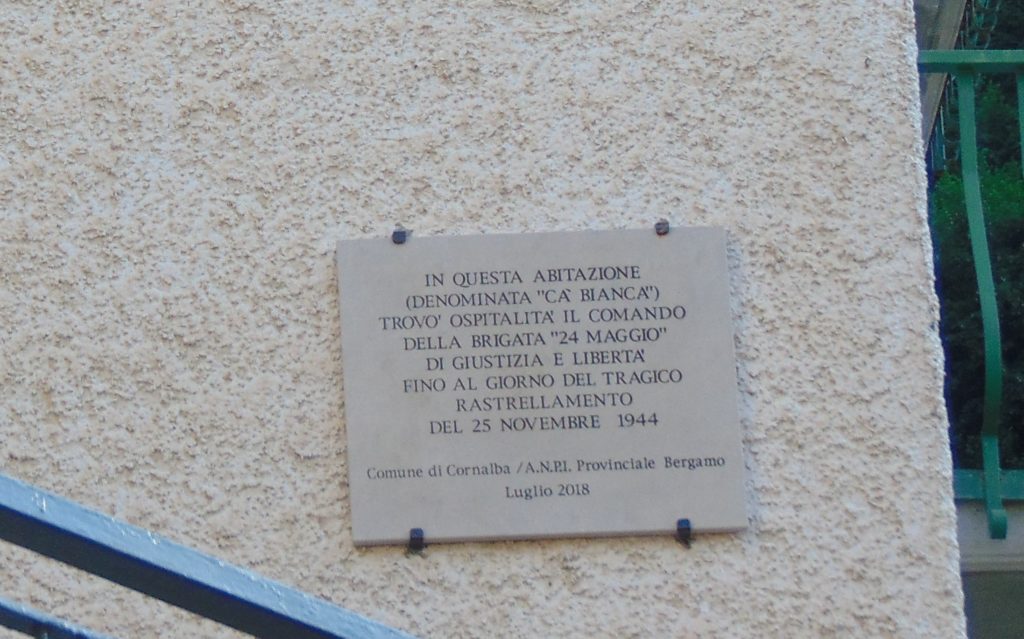 We continue to the large explanatory bulletin board that tells the story of the Justice and Freedom Brigade XXIV May.
That November 25th the commander Resmini, with his men of the Company O.P. of Bergamo, arrived in Valserina and stopped two couches going to Bergamo; Giuseppe Biava, Barnaba Chiesa and Antonio Ferrari, three partisans, were on the second one and were immediately executed.
Immediately afterwards the group of fascists split up: the first group, with the vehicles, reached Cornalba, passing through Serina, where it carried out a round-up; the second one, on foot, climbed the mule track through Passoni.
Two machine guns were placed: one on the bell tower and one on the church square, and some mortars in the Pagliarolo area.
When the enemies arrived, they began to flee towards the slopes of the Alben, which at that time were not covered by the forest as we see them today.
On the right side of the town the commander Giacomo Tiragallo “Ratti” and Luigi Cornetti fell under the mortar fire.
On the left side, under the fire of the machine guns, Pietro Cornetti, brother of Luigi Cornetti, Battista Mancuso and Giuseppe Maffi, died. When the fire ceased, Callisto Sguazzi “Peter” was also killed during the roundup.
Luigi Maver, Egidio Bianchi and Luigi Carrara were also captured.

Our path starts to the right and proceeds on a dirt road to the sanctuary of “Priest Zambell”, named after the priest Zambelli, who died in 1850 and who is considered by the locals the protector of pregnant women.
Continuing, from the dirt road a new path on the left goes up to Alben Mount. We take it and walk uphill through the woods until you come out onto the pastures of Alben, among its huts. 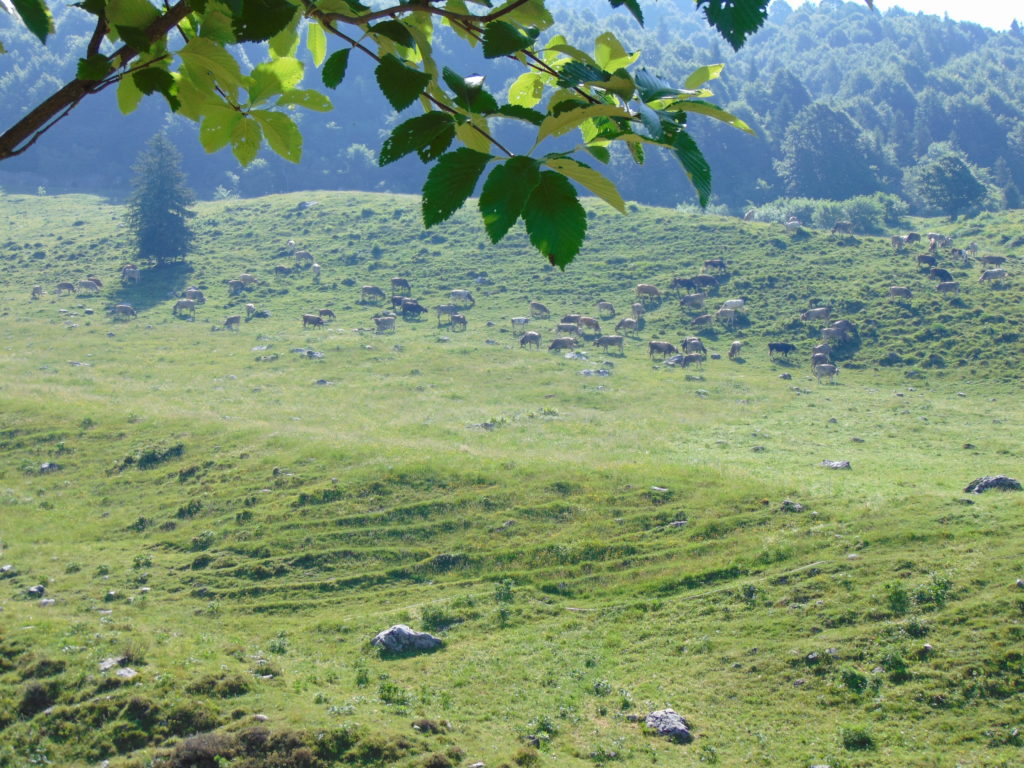 Pastures of the Alben 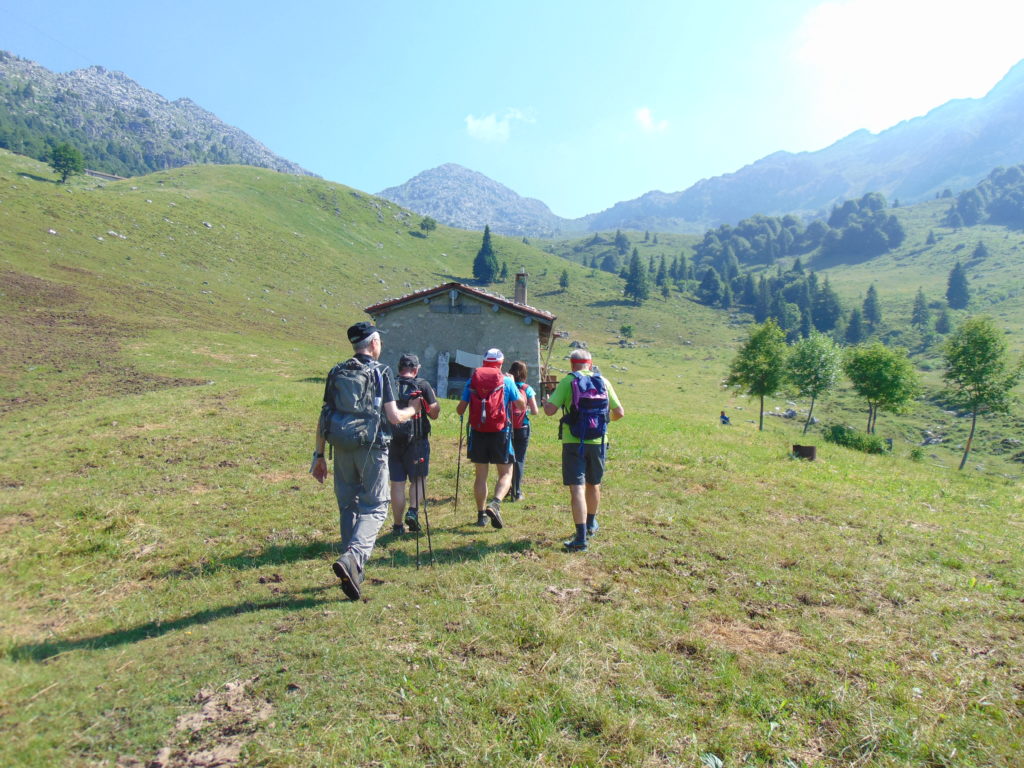 Near the Baita Bassa (Bassa Hut)

We continue towards “Baita Sura” or Baita Alta. 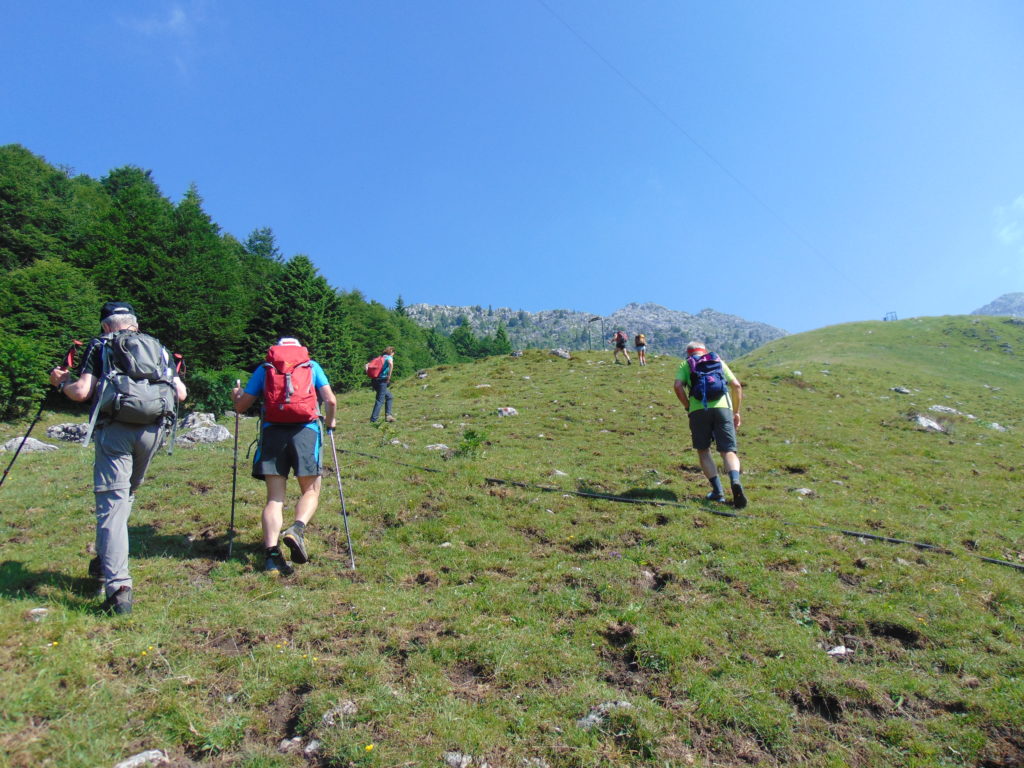 To the Sura Hut

Among the indications of the CAI paths, we do not lose sight of the wooden sign of the Path of the Partisans. 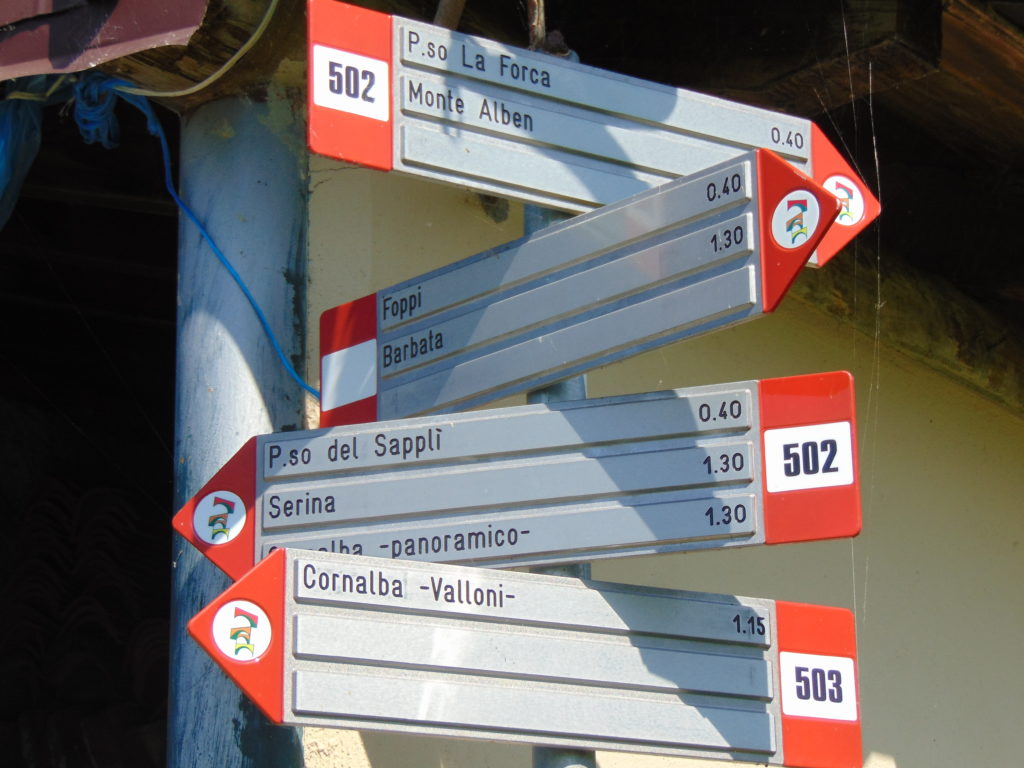 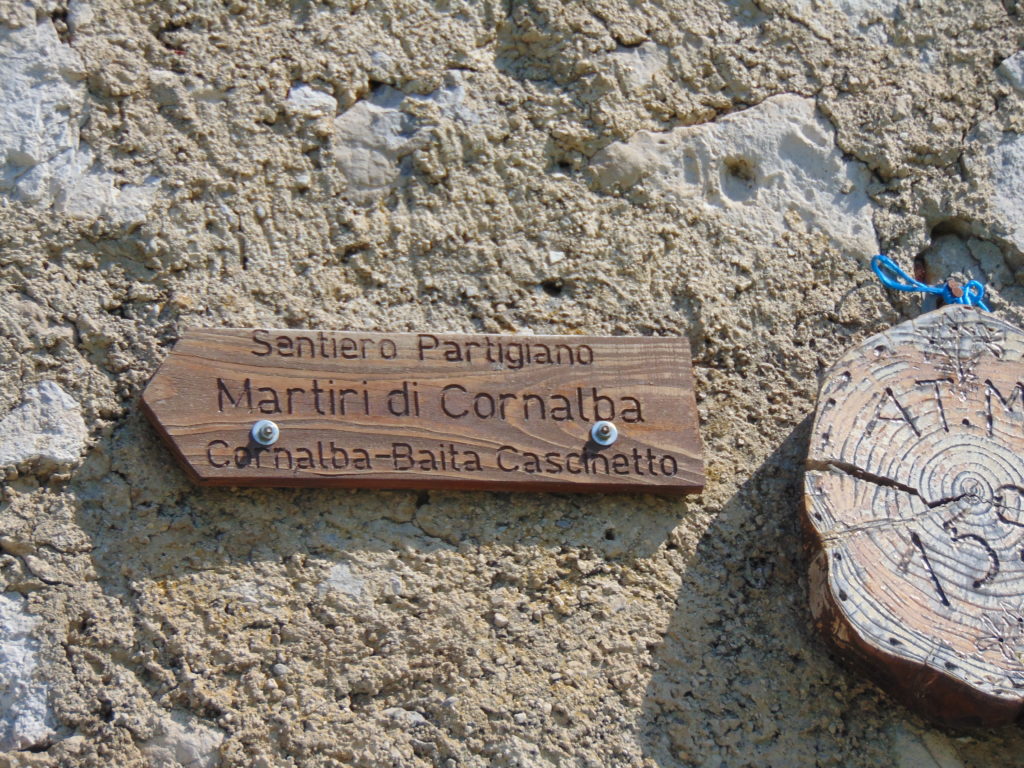 We continue in the direction of Cascinetto Hut and we pass next to a small chapel. 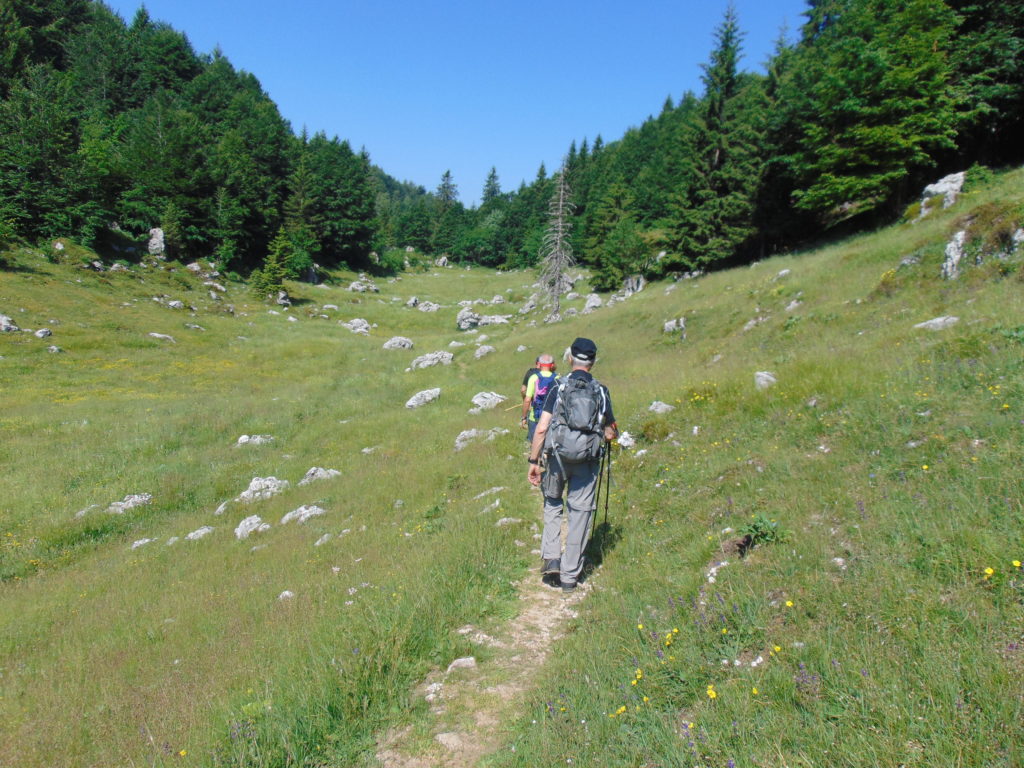 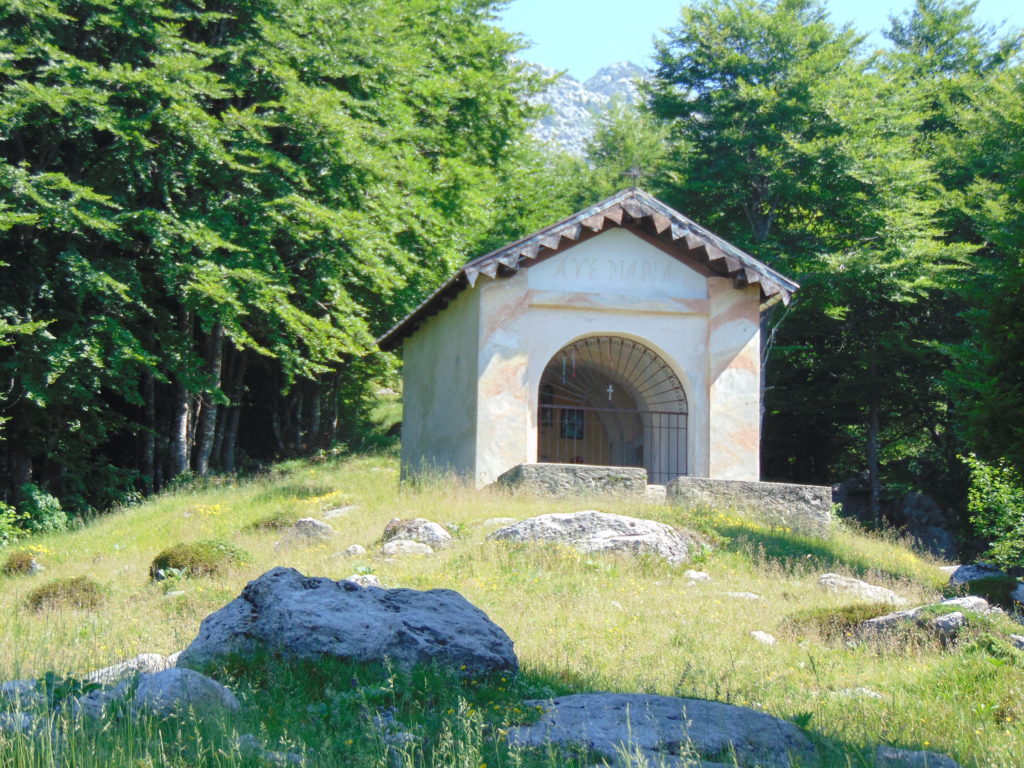 Before reaching the Cascinetto Hut, our exceptional guides take us to the top of Cornetti, where a large cross and a plaque are placed in memory of the Cornetti Brothers. 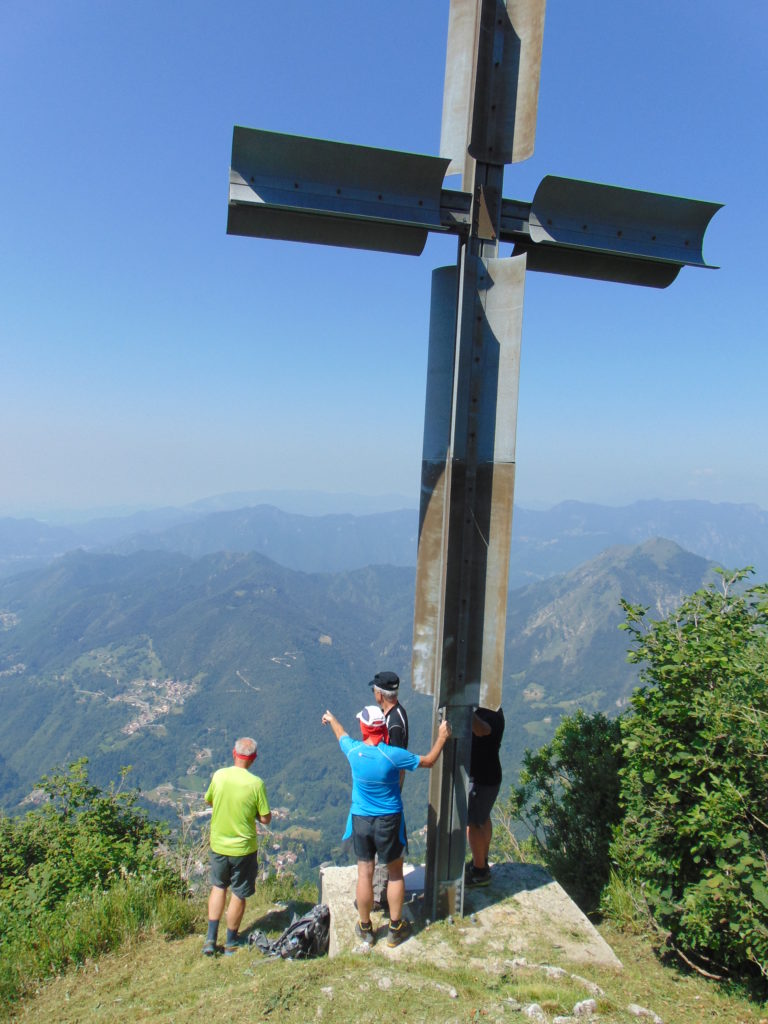 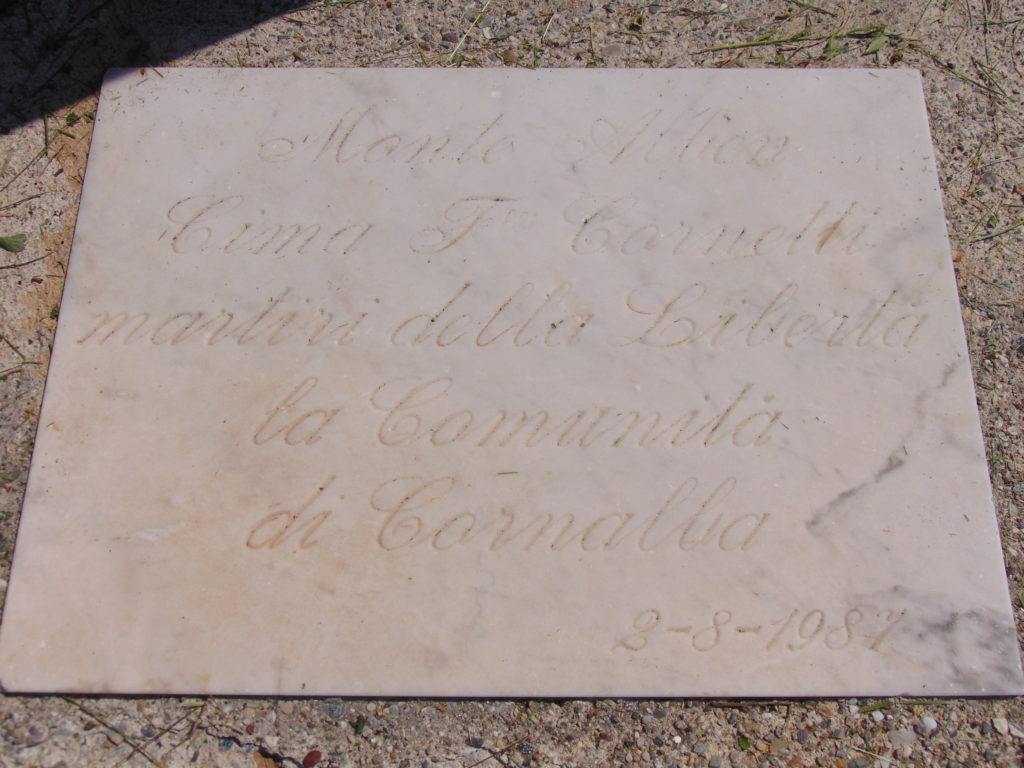 Plaque in memory of the Cornetti brothers who died on November 25th. 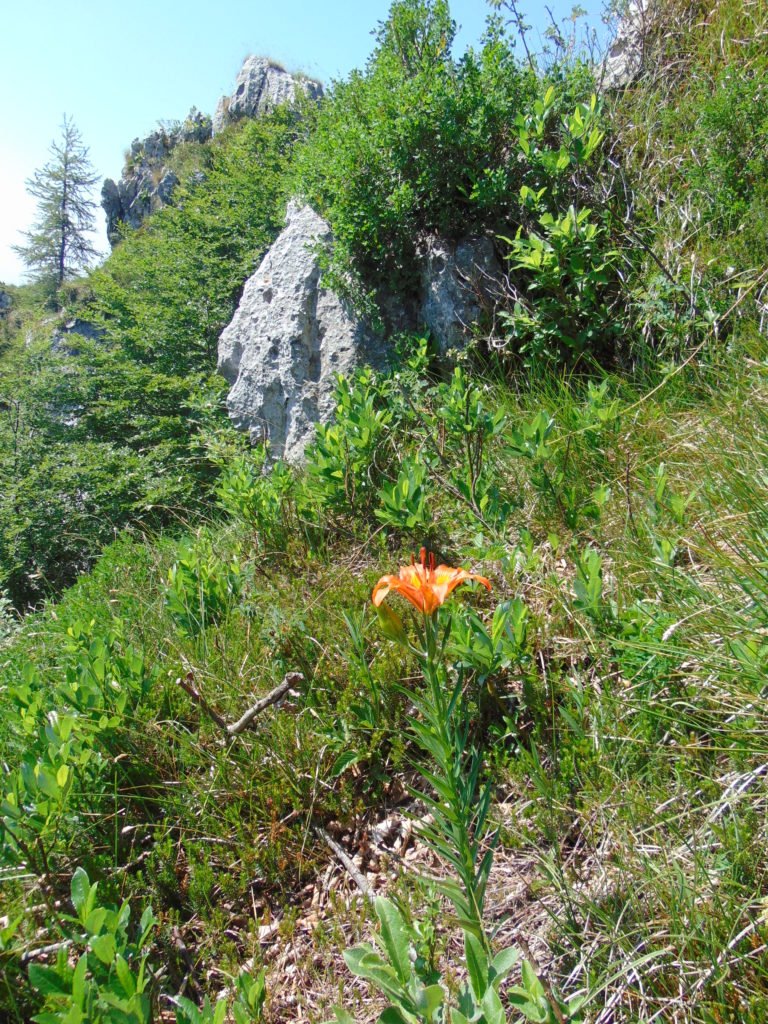 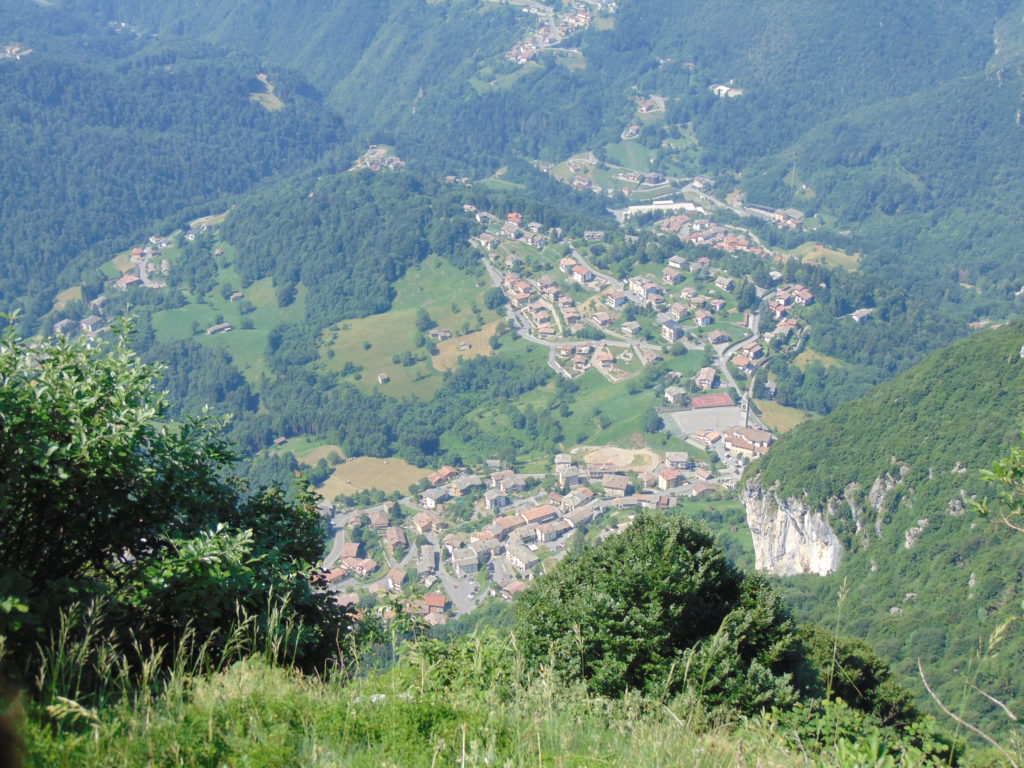 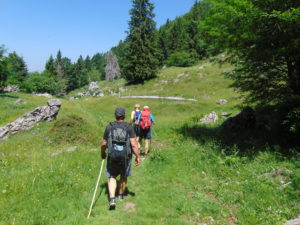 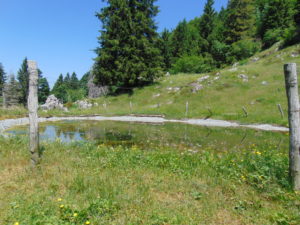 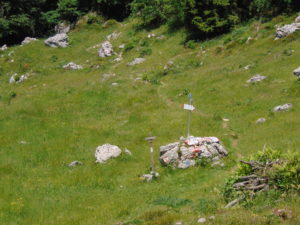 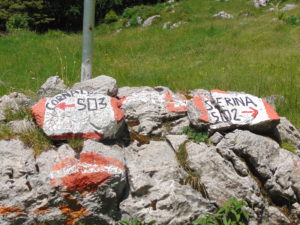 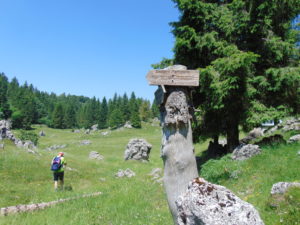 After November 25th there was a new round-up in Valserina and on Alben. On 1st December, the attackers reached the Cascinetto Hut, a warehouse for food and equipment of the XXIV May Group. Here, other partisans were surprised and killed: Mario Ghirlandetti and the Russians Angelo, Carlo and Michele. The fourth Russian Scialico Giogavaz was wounded and then saved. 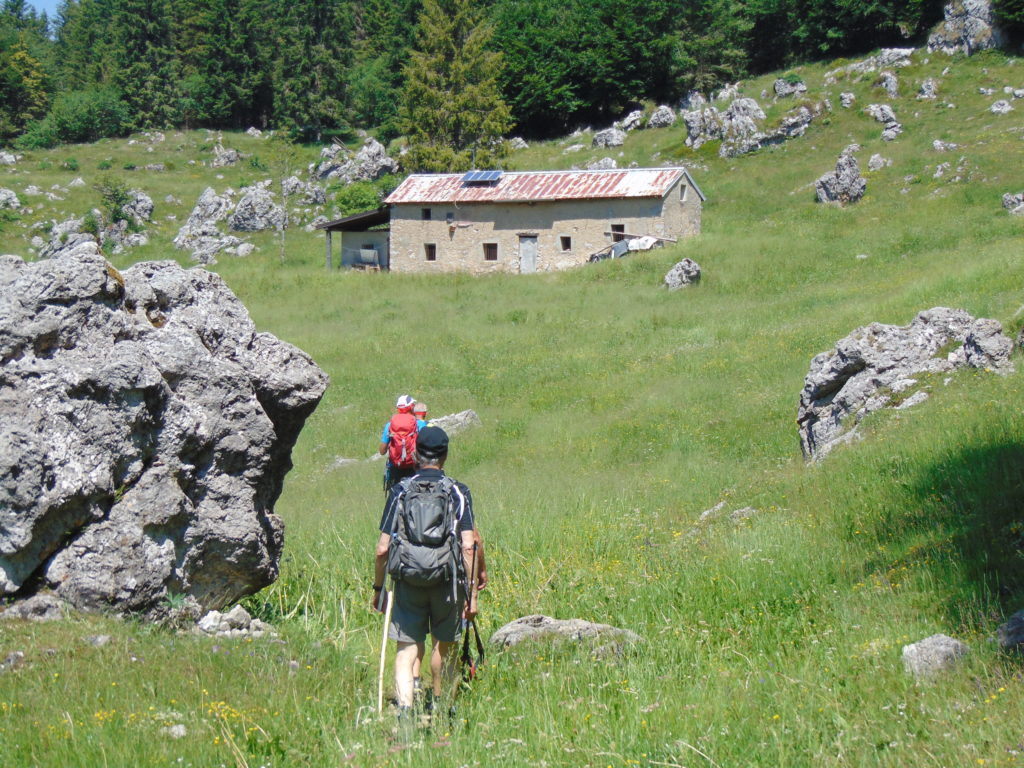 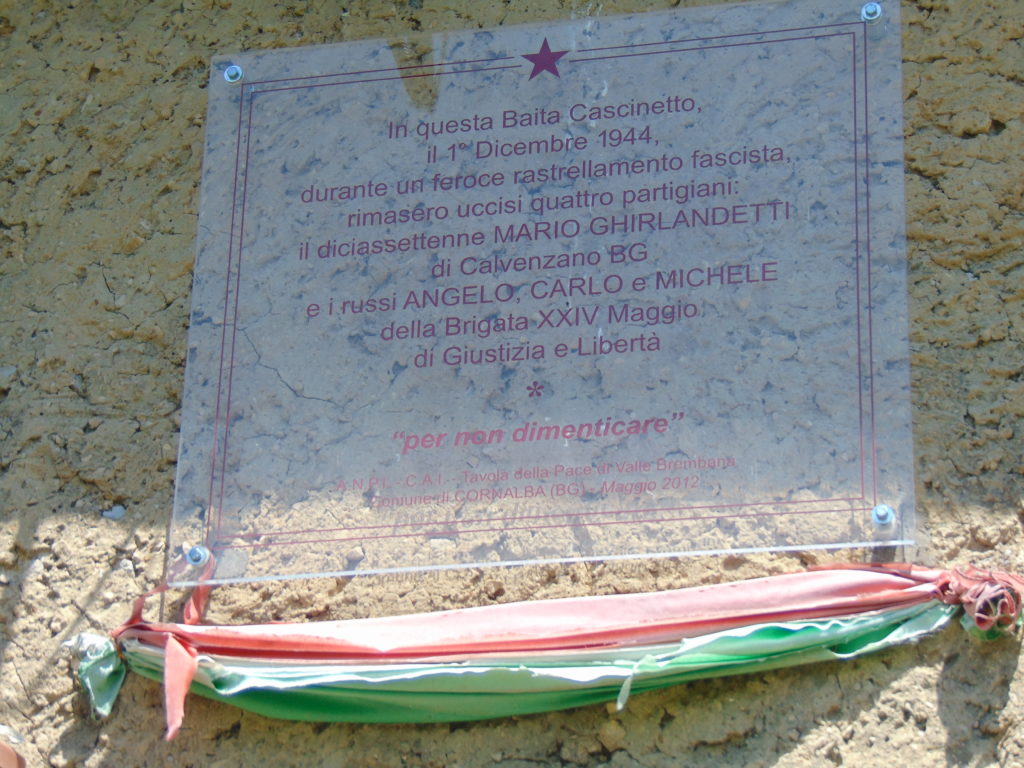 Plate placed on the external wall of the Cascinetto Hut

Our path continues in the direction of Cornalba, along a fairly steep path that passes near the Cornabusa cave. 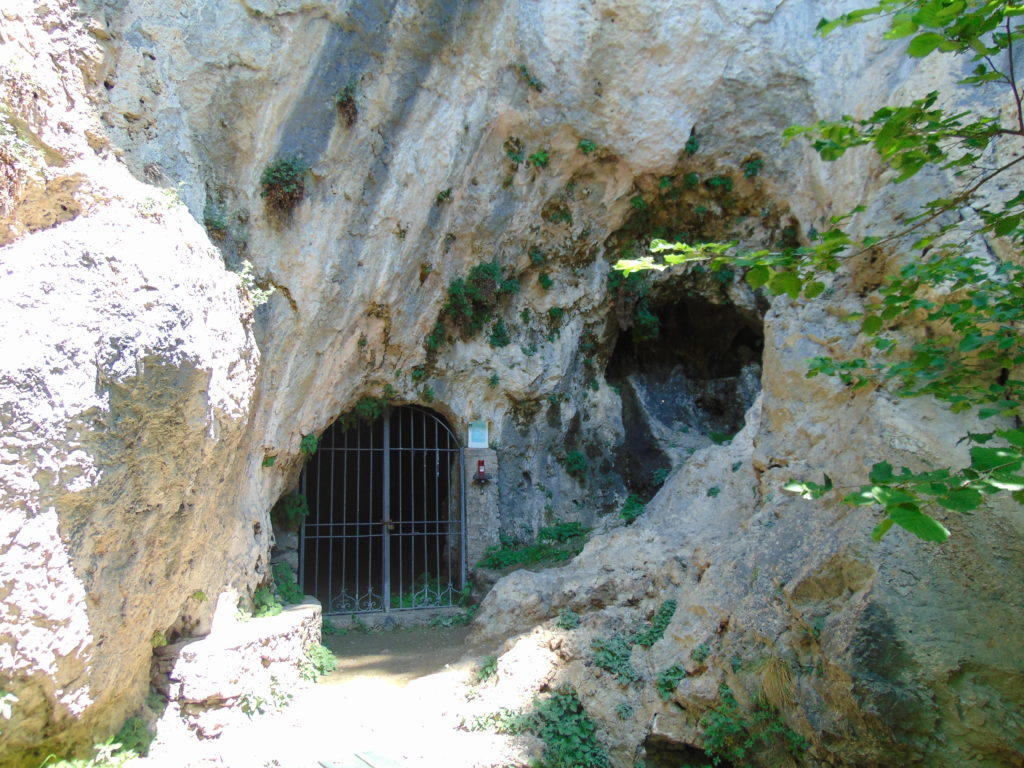 On the last downhill stretch, before reaching the village, just outside the track, you can see the crosses in memory of Callisto Sguazzi and Giuseppe Maffi. 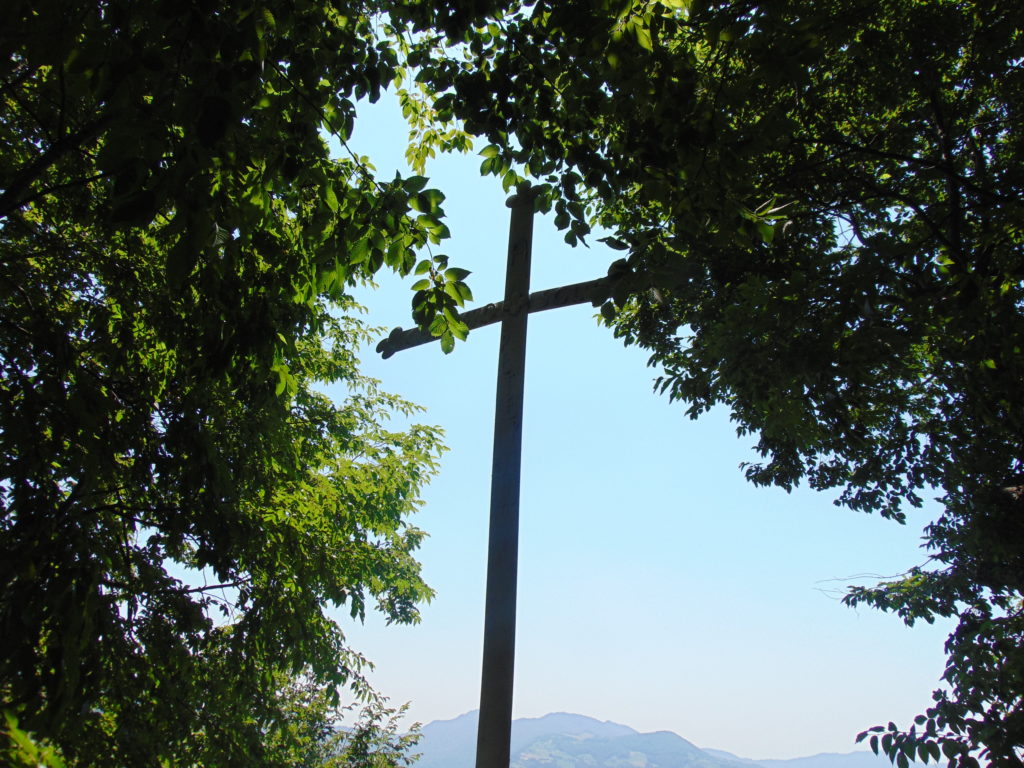 Cross in memory of Callisto Sguazzi 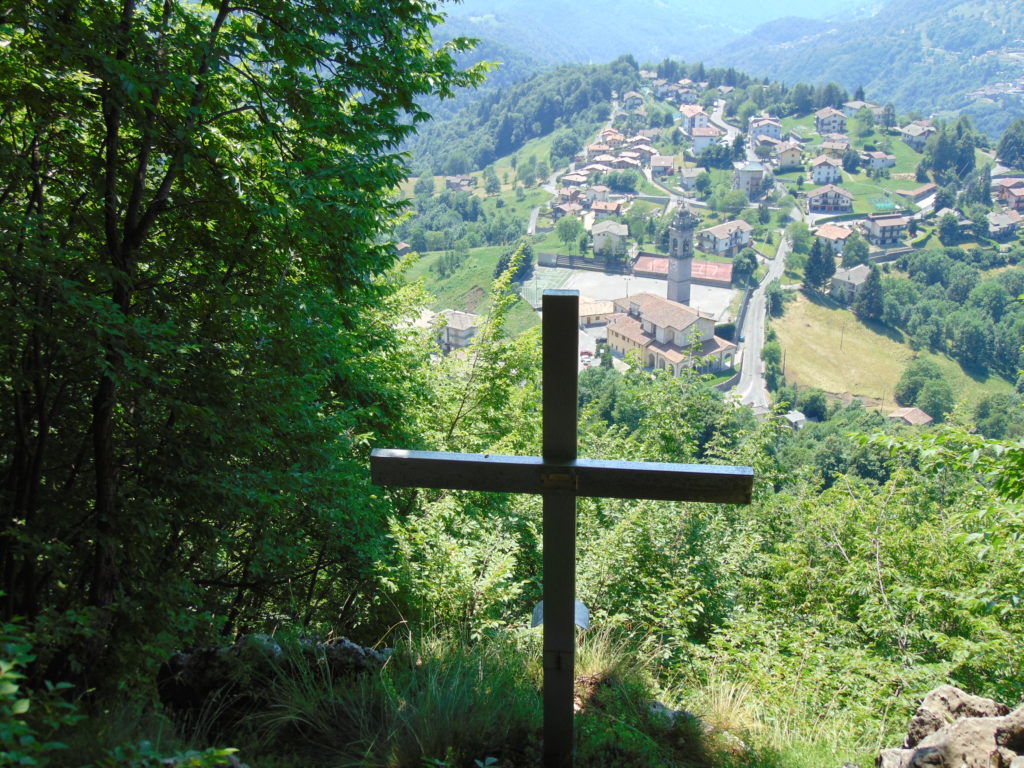 Cross in memory of Giuseppe Maffi

We thank those who took part to this excursion and our guides without whom it would not have been possible to find access to all places and without which our knowledge of history would have remained limited. 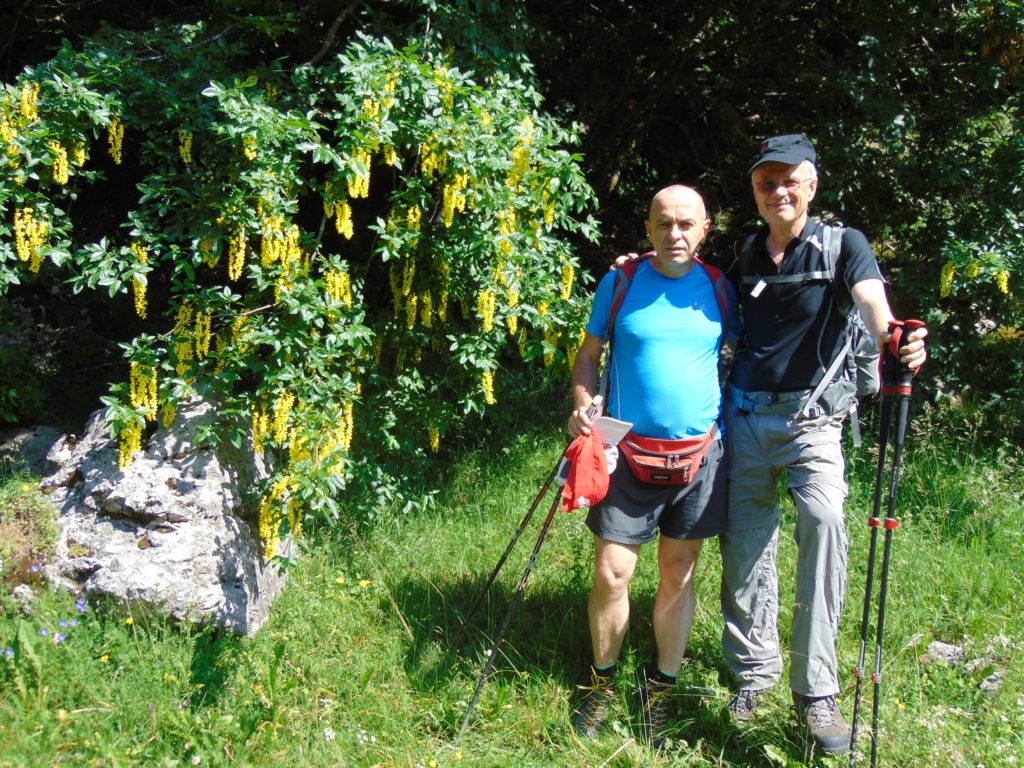